Search for Homes in the Casa Marina Neighborhood 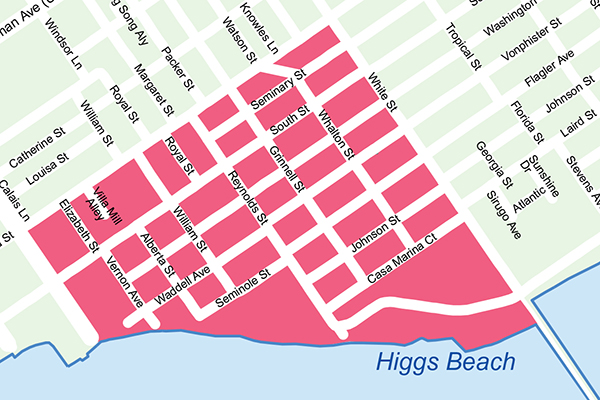 This luxurious yet quiet residential neighborhood receives its name after the famous Casa Marina hotel at the Southernmost end of Flagler Avenue. This area encompasses Simonton Street beginning at the Atlantic Ocean to United Street north to White Street and then east to White Street Pier and Higgs Beach.

The Casa Marina district does not fall within HARC (Historic Architectural Review Commission) so the homes in this area are a mix of mid-century modern architecture to ultra-modern new construction. Well-manicured tropical gardens surround the wide tree-lined streets that are perfect for an evening stroll or bike ride. Most residents are long-term with a select few homes available as monthly or seasonal rentals.

There are several great restaurants in the Casa Marina neighborhood such as Louie’s Backyard, The Southernmost Beach Cafe, and Saluté. For the exercise enthusiast, there are tennis, pickleball and badminton courts between Casa Marina Court and Higgs Beach as well as a fitness course. Bike, walk or run along the path that follows the beach all the way around the island. For dog lovers, there are two dog parks at the corner of White Street and Atlantic Blvd, for both big and small dogs. Higgs Beach also features two popular playgrounds, one fenced area directly on the beach adjacent to the West Martello Tower which is home to The Key West Garden Club. The second playground is directly across the street, known as Astro City. Competitive bocce is played several nights a week at the bocce courts at the eastern end of White Street.

Casa Marina homeowners enjoy the best waterfront recreation access of any Key West neighborhood. Make the most of your day by watching the sunrise at White Street Pier or enjoy some local fishing off the pier.

Beautiful. Historic. Ideal for Entertaining When you walk through the beautiful front door of this stunning two-story historic home, you will be amazed by the high ceil...

This beautifully renovated 3 BD/ 3.5 BA home is located in the X flood zone and the highly coveted Casa Marina neighborhood. Just a short walk or bike ride to Higgs Beach...

1421 Reynolds is a beautifully renovated mid century modern home located 3 blocks from Higgs Beach, one of Key West's best beaches and the perfect spot to watch the sunse...

''The Blue Pearl'' is a 4-bedroom, 3-bathroom home in the desirable Casa Marina neighborhood of Key West. This home has been fully rebuilt and renovated with high-quality...

Rare Ocean View Single Family Home in Key WestSituated on the most exclusive Street in Key West, 1015 Casa Marina Court is waiting for your imagination. Restore it to its...

In the perfect Old Town location, in the Casa Marina neighborhood (X Zone), sits this charming Pineapple Cottage awaiting for the fortunate new owners to make it their ow...

Historic light-filled Classic Casa Marina estate hidden away for quiet privacy on Villa Mill Alley, yet just a block or two from the beach, Louie's Backyard and Duval St...

This incredibly private estate located in the heart of Casa Marina district rests on a rare, expansive 15,000sf lot. There are 4 dwellings in total, two main houses, one ...

Charming Casa Marina Home. Move in ready! This home has all the desirable features with a magic layout; kitchen that flows to the living room that flows out glass doors t...