Search for Homes on Sunset Key 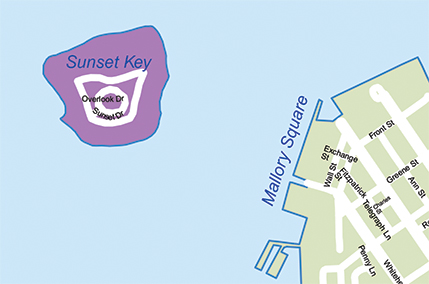 Sunset Key is luxurious private island living just a short boat shuttle away from the Margaritaville Resort on the west end of Old Town Key West. The only transportation allowed on the island are golf carts. Sunset Key is a 27-acre community with 88 residential parcels, L’atitudes, a 5-star restaurant, and guest cottages operated by the Margaritaville Resort. Additional island amenities include The Spa at Sunset Key, a fitness room, tennis courts, its own Fire Station and three sandy beaches.

The restaurant is open to the public, however, one cannot board the ferry without a reservation. The same goes for the spa. Access to the residents is also highly controlled. Visitors cannot access the island without a pass or an accompaniment. This level of security plus the resort amenities makes this location ideal for high profile residents and visitors alike.

Like so much of Key West’s dependence on the Navy to carve our history, this also begets Sunset Key’s history. During the Cuban Missile Crisis of the 1960’s, the Navy dredged the harbor to accommodate the larger vessels and submarines that were either stationed or visiting Key West. The fill was deposited on what was then known as Tank Island to create a fuel depot to carry fuel to the Navy ships docked at Truman Annex. Interesting fact: The fuel depot would have had twelve 40′ tall, 80′ in diameter fuel tanks (such as what you see at refineries and fuel depots). Only two fuel tanks were installed. Tank Island was dismantled after the Cuban Missile Crisis was over and the tanks were never used.

Tank Island was auctioned by the US Government in 1986 and renamed Sunset Key in 1994. The new owners used the fuel lines installed across the harbor by inserting smaller pipes inside those fuel lines to carry water and sewage. Fiber optic cables were laid for telephone lines and cable television, and armored electrical cables were laid alongside the pipes.

Because of such a large amount of fill, Sunset Key is primarily built above the base flood, thus resulting in lower insurance costs than mainland Key West. A homeowner’s association is set up to protect the quality of the life on Sunset Key, and to cover some basic expenses such as the ferry service, common area maintenance, beach maintenance, etc. The ferry runs 24 hours a day and leaves every 30 minutes. The residents have on-demand ferry access after hours.

For the discerning home buyer who is looking for privacy, security, peace, and quiet, as well as resort amenities, look no further than Sunset Key for the ultimate in luxury island living.

Immerse yourself and come home to prestigious Sunset Key and enjoy all the ambiance and attractions of Key West, just minutes away, while preserving maximum peacefulness ...

NEW CONSTRUCTION. SOON TO BREAK GROUND. Key West oceanfront luxury living can be yours on the world-famous island of Sunset Key. This custom built home is the first new c...

Talk about views! This three-bedroom, three-bathroom waterfront home has incredible panoramic views of Key West Harbour and the historic waterfront. No expense was spared...