Search for Homes in Truman Annex

Rich in history, quaint in charm. 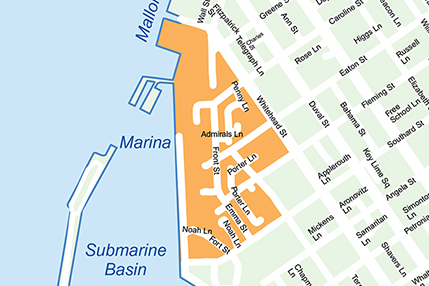 Truman Annex has primarily been Navy property. To share a bit of brief history, the Navy first came to Key West in 1823. During both the Mexican – American War and Spanish – American War, the Navy further expanded its presence on the island. It wasn’t until World War I that the Navy moved into what is now known as Truman Annex where they built a submarine base. After World War I, this base was used sparingly through World War II and the four decades after.

In 1987, the Truman Annex Parcel was sold to developer Pritam Singh for $17M. The Navy retained the remainder of the Truman Waterfront until 2002 when 33 additional acres were conveyed to the City of Key West. This area is currently being developed as The Truman Waterfront Park with ample open-water green space, an amphitheater, and a children’s splash park!  The remaining 17 acres were retained by the Navy and are used today as headquarters of JIATF-South.

Truman Annex is Key West’s largest gated community which is comprised of seven distinct areas: The Foundry, Mills Place, Harbour Place, Porter Court, President’s Lane, Shipyard Condos and the prestigious private homes of Truman Annex. The renovation and new construction of both historic properties such as The Foundry and the private homes are exquisite. In addition to the beautiful architecture and open streets, Truman Annex is home to the Truman Little White House, where President Harry Truman hosted his working vacations in Key West.

Truman Annex contains both year-round and seasonal residents. Within the Annex, there are certain eligible properties that have a “special residential transient rental permit”. These properties are allowed to rent for a minimum of 7 days up to 26 weeks per year, which makes these locations enticing investments. Off-street parking is currently appraising at an all-time premium.

Travel south on Southard Street to the Waterfront Park and follow the road to the Eco-Discovery Center and the entrance to Ft. Zachary Taylor State Park, the island’s only natural beach where the Atlantic Ocean and the Gulf of Mexico meet. There is a wonderful swimming area with large rocks perfect for the beginning snorkeler. Ft. Zach, as the local’s call it, is a wonderful place to spend your days off, have picnics with family and friends, and take in the breath-taking sunsets we are famous for!

Currently on The National Register of Historic Places, The James J. Curtis House c. 1874 was acquired by the Navy in 1903. Extensive work was performed on the home which ...

This first-floor condo has 2 bedrooms and one bath. It is unit 210-1 Southard as tax records show as unit 128, which was developer's numbering. This does NOT have, or qua...

Known as Building #11, this extraordinary property built in 1918, is the historic site of the 'Machine Shop' in the heart of the award-winning gated community of the Trum...

One of only 6 Shipyards that overlook Southard Street that are 800 square feet, and wider than the depth, giving huge porches on both the front and rear. This is a two-be...